We’re thrilled to see the handiwork of long time CSD paralegal, Jenny Brumfield, land on the cover of the July/August issue of HGTV magazine.  Jenny said she was surprised to see it there as the magazine had originally reached out to her in the spring but then indicated they were going to go in another direction.   She said she might not even have seen it had a friend not spotted her work and called.

The HGTV cover displays a very nautical-looking porch swing at a Rhode Island beach house and the article is part of its summer theme for “getting beach house style.”  Jenny’s pillows (one with a red & white vintage Coast Guard flag and the other with a Wawenock Power Squadron flag) are front and center.  She says she sold the pillows to the owner of the beach house in 2017.

This isn’t Jenny’s first appearance in a magazine.  Last year Country Living magazine featured a Vashon Island cabin, and Jenny supplied pillows and vintage flags for the shoot.   Prior to that, designer Jonathan Adler requested forty pillows for his remodel of The Parker hotel’s spa, fittingly The Palm Springs Yacht Club.

Jenny has been collecting and repurposing vintage yacht club and other nautical flags (over 500 now!) for the last nine years.  She opened her Etsy store to sell the popular pillows and flags in 2013. 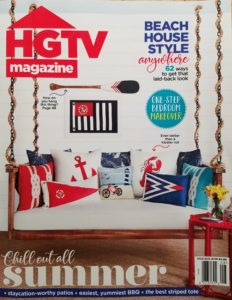